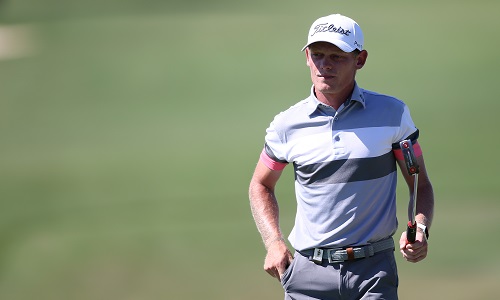 He goes into the final round of the Alfred Dunhill Championship at Leopard Creek this morning in the company of a Masters champion, and MJ Viljoen will tackle the task with a relish born of confidence.

The 24-year-old from Bloemfontein has one win on the Sunshine Tour to his name, but with two top-10s to his name this season â€“ including a runner-up finish in his last tournament â€“ heâ€™s clearly on an upward curve, and his three-under 69 in the third round at Leopard Creek in difficult conditions showed that very clearly.

â€œIâ€™ve had a couple of good performances before, but they werenâ€™t in big tournaments,â€ he noted. â€œBut learning from those experiences and coming to the big tournaments knowing that I have been in a similar position before really does help.â€

Learning as well as he has means he will be playing with Charl Schwartzel in the final round, a man who has won the Alfred Dunhill Championship four times and been runner-up four more. No doubt, Viljoen will be watching closely â€“ and learning even more.

His win came back in September 2017, and he became a little frustrated at not pushing on to become a more dominating player. â€œIâ€™ve been working with Hendrik Buhrmann from last year this time,â€ he said.

â€œI never had the knowledge of being a world-class golfer, you know, putting the club in the right position, hitting the ball in the right place and things like that. Just having that knowledge, and those little techniques â€“ it really does help, especially the techniques around the golf course on any occasion.

â€œTalent can only take you so far, and having knowledge really does help a lot if you want to be a world-class player. The knowledge is becoming a natural thing now. Iâ€™m not over-thinking any more. Iâ€™m just playing and getting around the course with that knowledge.â€

Heâ€™s showed heâ€™s a quick study with his improving rounds of 72, 71 and 69 in increasingly difficult conditions seeing him climbing steadily up the leaderboard. At four-under for the tournament, he might be a long way off the lead which is at 11-under, but he knows that more improvement gives him every chance of getting into the mix.

â€œI did set myself a goal for about 12-under to give me a chance to maybe lift the trophy,â€ he said. â€œBut the course is playing so tough, and the wind being up makes it tougher. So 12-under is not out of reach but youâ€™ve got to hit the ball brilliantly to reach that score. I think Iâ€™ll revise my goals tonight and I only found my golf swing today, so I hope the fourth round is going to be the best round of the week.â€