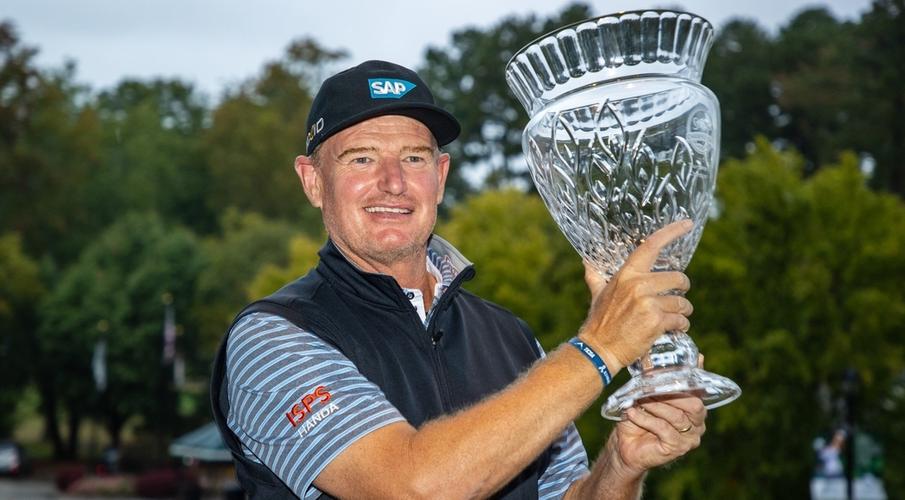 Ernie Els birdied the final two holes, running in a 40-footer in the rain on the last, for a 6-under 66 and a one-stroke victory over Colin Montgomerie on Sunday in the SAS Championship.

Els made the long putt on the par-4 18th three weeks after missing a 2-foot putt on the final hole of the PURE Insurance Championship at Pebble Beach to finish a stroke out of a playoff.

â€œItâ€™s a crazy game,â€ Els said. â€œA couple of weeks ago I missed a very short putt to get in a playoff and today I make a 40-footer. Figure that one out.â€

Jim Furyk missed a chance to become the first player to win his first three PGA TOUR Champions events, closing with a 70 to tie for ninth at 8 under â€” four strokes behind Els. Furyk won at Warwick Hills and Pebble Beach.

Els won for the second time in his first 10 starts on the PGA TOUR Champions. The South African star, a four-time major champion with 19 PGA TOUR titles, finished at 12-under 204 at Prestonwood Country Club. He pointed to putting help from fellow player Mark O’Meara.

â€œJust by chance I saw him on the putting green the other day and we just started chatting a little bit,â€ Els said. â€œHe uses the same putter that I use, so we started talking a little bit and I said, `Hey, have a look here.â€² I didnâ€™t have a great experience at Pebble obviously a couple weeks ago. He looked at me, and heâ€™s a great putter and knowing a man that long, he gave me a nice assist. He told me what he felt I should do and here I am. So, I owe Mark Oâ€™Meara.â€

Els tied Montgomerie, playing three groups behind, with the birdie on the par-5 17th and pulled ahead on 18.

â€œI had 64 in mind,â€ Els said. â€œEspecially on the final round, the guys, there were so many guys bunched. I was coming from 6 under, I reckoned 14 under was maybe a good score, but then the conditions helped out and it became really tough. So, 66 just squeaked in there.â€

Montgomerie, tied for the second-round lead with Darren Clarke and Woody Austin, parred the final four holes â€” giving himself little chance on 18 when he hit his 190-yard approach 50 feet left. He shot a 70.