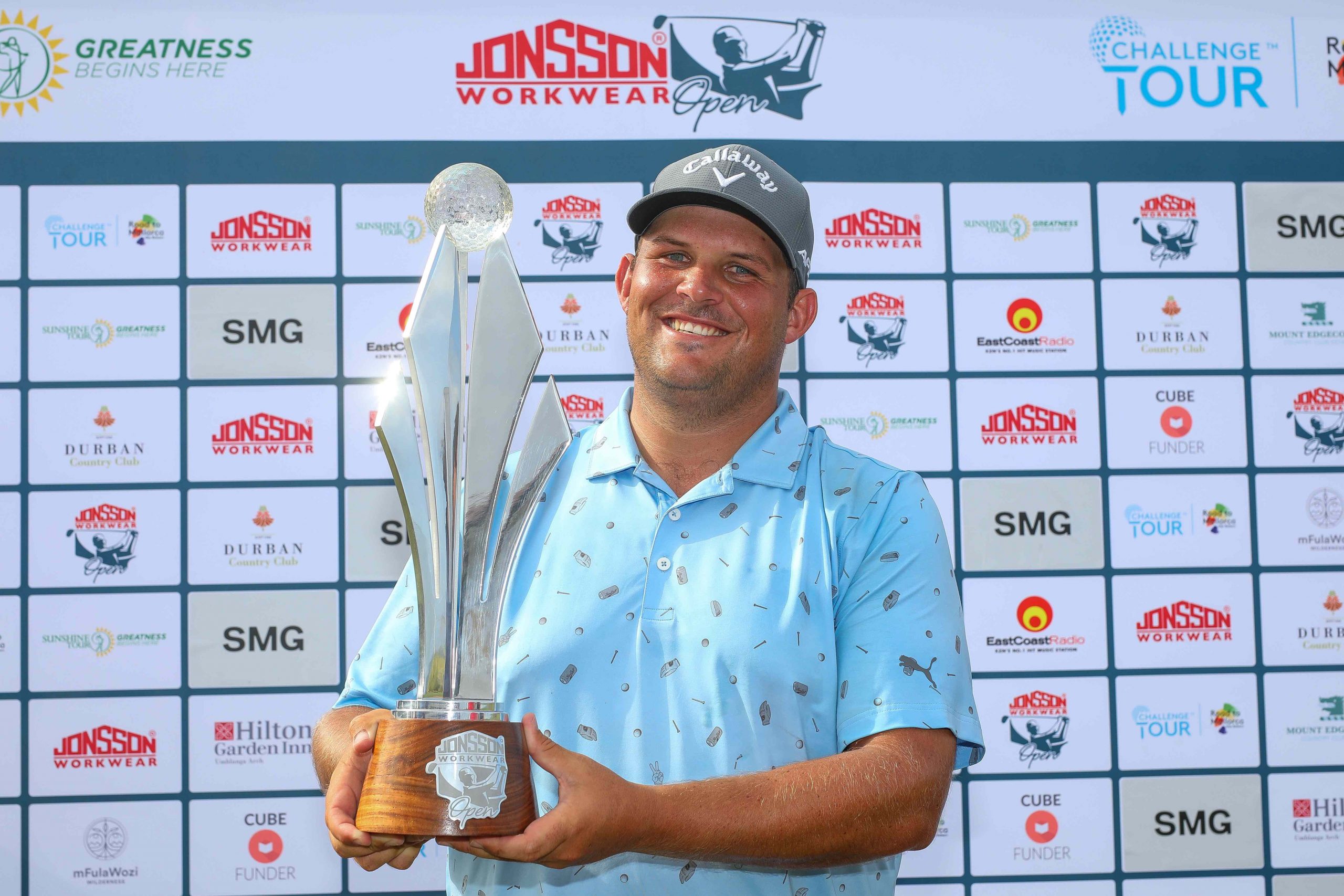 DURBAN – JC Ritchie won the Jonsson Workwear Open at Durban Country Club on Sunday to claim back-to-back victories on the Sunshine Tour and Challenge Tour, and take another bold step towards his goal of playing on the DP World Tour.

On a far more windy day at Durban Country Club, Ritchie withstood a strong charge from Belgium’s Christopher Mivis and signed for a final round of 71 to win by six shots on 26 under par.

“I don’t have the words for this. This week has been unbelievable. I had a hole-in-one, set a course record, had my birthday, broke my lowest score twice, and then won the tournament. I’ve never dreamt of this. This is special,” said a delighted Ritchie, who also won last week’s Bain’s Whisky Cape Town Open.

The Johannesburg golfer went into the final round with a 10-shot lead and having set a 54-hole scoring record on the Challenge Tour of 25 under par. But on a more tricky final day that changed the nature of this golf course, his lead was whittled down to two shots with five holes remaining as Mivis took up the challenge that was offered to the rest of the field.

As Ritchie came through 13 holes at one over for the day, Mivis was eight under through 15 holes. The Belgian made four birdies in five holes over the turn, bogeyed the 12th, and then birdied the 13th, eagled the 14th and birdied the 15th to suddenly have Ritchie in sight for the first time this week.

“I had no idea what was going on until we finished playing the 14th hole. That’s when my girlfriend Sarah came up to me and asked if I’d like to know the scores and I said, ‘Yes’. I was surprised. But I never felt like I was in trouble. I always knew somebody was going to shoot maybe seven under par, and that would still be three short of where I was. I knew I just needed to be level par or under par. I was hitting the ball well enough to not shoot over par. I was a bit nervous but once I settled in to the final round I was one over par and still had the lead by a couple of shots, so that made it easier coming down the stretch to make a couple of good swings and find birdies on the last two holes,” Ritchie said.

Mivis bogeyed his final two holes to settle for second place on 20 under par with a closing 66.

The win is another major boost towards Ritchie’s goal of playing on the main DP World Tour. Earlier in the day, Mark McNulty gave a glowing endorsement of Ritchie, who was chasing his Sunshine Tour 72-hole scoring record of 29 under par.

“I’ve been watching JC for a while now and I think he has immense talent. I love his swing and he is a very solid putter. He has it all. I think whether he is able to progress onto either the DP World Tour or on the PGA Tour, he will be very successful,” said McNulty.

And Ritchie is just as eager to make that step up.

“That’s what I’ve been dreaming of and I’m glad I’ve managed to get a step closer than I was last year. Hopefully I can close it out before these Challenge Tour events in South Africa finish. I’ve always felt my game is good enough to win in Europe and I’m good enough to take the step. In golf it comes down to one tournament for everything to change, and it sort of has.” – Michael Vlismas