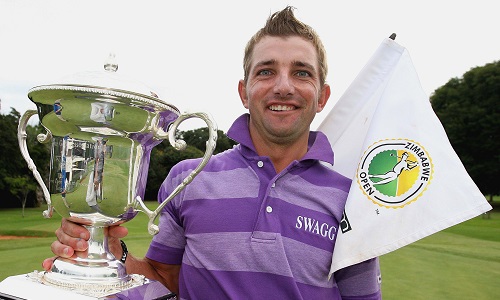 In this series, we look back at tournaments that happened when the Sunshine Tour was open for action 10 years agoâ€¦

His maiden Sunshine Tour victory had come in 2009 in the Zambia Open, and, in late April 2010, Jbeâ€™ Kruger was turning it on in a flashy display of low scoring to race to a two-stroke victory in the Africom Zimbabwe Open from April 21-24 at Royal Harare Golf Club.

It was Michaelâ€™s second-round 62 which caught the eye, however, and even though he and Cayeux had carded even-par 72s for the third round, the final-round battle looked to be between the two of them. But ignoring Krugerâ€™s 68-69-67 opening would not have been in the thinking of any of the contenders, as he already had a good few low closing rounds to his name.

Only Van den Berg, Van Zyl and local Ryan Cairns had gone lower than Kruger in the third round with their 66s, so the youngster who had been a professional since January 2007, and who had showed so well in Januaryâ€™s Africa Open with his share of third behind winner Charl Schwartzel.

Kruger didnâ€™t open his charge for the top of the leaderboard spectacularly: A birdie on the first was followed by pars on the par-three second and the par-five third â€“ a missed opportunity for sure. He birdied the fourth and fifth, however, to get to the turn in two-under â€“ 14-under for the tournament â€“ and still very much in the mix.

Michael turned in level par, and Van Zyl in three-under. Van Zyl picked up another shot on the 11th to go to the front, and a birdie on 12 seemed to set him up for a charge for home.

But Kruger was just getting started: He made eagle three on the 530-yrd 12th before settling himself with a par on the 448-yard 13th. That was the signal for him to put his foot to the floor as he set off in pursuit of his second Sunshine Tour title. Three consecutive birdies from 13 to 15 put him clear as Van Zyl birdied 13, and had to wait until the 17th for another gain to attempt to haul in the flying Kruger.

It was not enough, however, as Van Zyl, 20 minutes ahead of Kruger, made his fourth consecutive par on the deceptively tough closing par-four 18th.

That left Kruger to par his way home to maintain his lead, while, behind him, only Cayeux had much of a chance, and his two birdies in the closing nine were enough for a three-under 69, but not for victory.

And so Krugerâ€™s second victory â€“ like his first â€“ came outside South Africa.