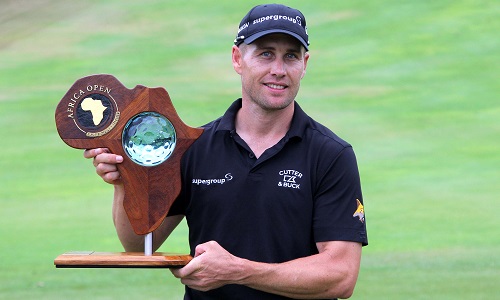 The Africa Open was played eight times, and produced a list of great South African names as champions. But can you remember who the last winner of the tournament at East London Golf Club was?

Sure, you can recall the two-in-a-row performance from Louis Oosthuizen in 2011 and 2012. And you can recall that Retief Goosenâ€™s last title on the Sunshine Tour came in 2009 in the second edition of the event. If youâ€™re really sharp, youâ€™ll even remember that Shaun Norris won the inaugural tournament in 2008 when it was played at the Fish River Sun Country Club near Port Alfred.

So who was the last man to win the title? It was Trevor Fisher Jnr in 2015, when he romped to 24-under-par for the week for a five-stroke victory over Englandâ€™s Matt Ford, with Eduardo de la Riva, Jorge Campillo and Morten Orum Madsen in a share of third another three strokes back.

It was a third-round 63 â€“ nine-under-par â€“ which set up Fisher for the win after Ford had led at the halfway mark. The Modderfontein pro took a two-stroke lead into Sunday with that brilliant performance on the Saturday.

He made seven birdies and an eagle in the third round in a display of flawless golf which propelled him into a position to win his maiden European Tour title. Heâ€™d also made only two other bogeys in the tournamentâ€™s first two rounds â€“ at the eighth in the first round, and on the first in the second.

There were no outward signs of any nerves as he birdied the first and third holes, while Ford, his nearest challenger, did the same. But Fisher appeared to falter with a bogey on the fifth. Ford pounced with birdies in six and seven, and Fisher was able to hold the Englishman at bay with answering birdies there too.

The turning point came on the ninth, when Ford dropped a shot and Fisher birdied to restore his lead to two strokes as the pair headed to the homeward nine.

A birdie for Ford on 14 brought the gap back to two, but it galvanised Fisher into action. He responded to the challenge with birdies on 15 and 16, and rounded off the rout with a sublime birdie on the closing 18th as he came home in 31 for a comfortable victory.

It was a significant win for Fisher: It secured the 36-year-old the elusive European Tour card he had been chasing for nearly a decade. â€œIâ€™ve tried so hard to get that European Tour card, for so many years. Obviously itâ€™s a massive step for my career because thatâ€™s where all South African golfers want to be,â€ he said.

That was to be the last playing of the Africa Open on a course that was much-loved by the Sunshine Tour and European Tour professionals alike â€“ unless it gets resurrected in a world after lockdown!