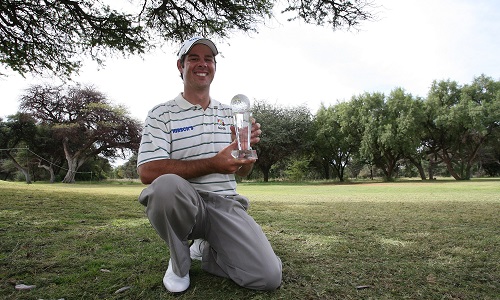 In this series, we look back at tournaments that happened when the Sunshine Tour was open for action 10 years agoâ€¦

It was a year to remember for Jaco van Zyl back in 2010 as he won four tournaments on his way to a sixth-place finish on the Order of Merit â€“ and he did it in some style at the Vodacom Origins of Golf tournament at Sishen.

With the likes of Ulrich van den Berg, Keith Horne and Justin Walters posting low final rounds, local boys Jbeâ€™ Kruger and Theunis Spangenberg turning the screws, and, most ominously of all, Jean Hugo on his way to a trademark storming 63, Van Zyl did all he had to do to win with his own bogey-free 67 and a sixth title on the Sunshine Tour.

Van Zyl had set off like a house on fire in the first round: He had five birdies and an eagle on his scorecard without a dropped shot. He started his round on the 10th, and was quickly into his work with an eagle on the longest hole on the course, the 520-metre 11th. He followed it up with a birdie on 14, and then three in a row from 16 to 18. There was just a single gain as he turned for home on the front nine, but it was all enough for him to be a shot clear of local veteran Des Terblanche at the end of the day.

He followed that with a four-under 68 in the second round. Heâ€™d started that as if he meant to make sure he was uncatchable, with five birdies and not a single dropped shot in the opening nine. But consecutive bogeys after the turn set him back a little, and he picked up just one of those two shots lost when he birdied the 14th.

Charl Coetzee, Adilson Da Silva and Chris Swanepoel had made up a lot of ground on Van Zyl, and were lurking just one and two strokes back as the final round began. Kruger, who learnt his golf at Sishen, was three back, Hugo five, Spangenberg six, Van den Berg eight and Walters nine.

Walters was the first to move, with two eagles and four birdies on his way to a 64, but it was a few shots short of being a challenging clubhouse target for Van Zyl. Van den Berg made 11 birdies and two bogeys in his 63, and that meant Van Zyl was going to have to go two-under to win.

Spangenberg and Kruger carded 64 and 65 respectively, which meant Van Zyl had to do some real work to finish ahead of them. But it was Hugoâ€™s 63 â€“ which included a hole-in-one on the eighth, and eagle on the second and three more birdies on his front nine of 29 â€“ which was an attention-seeker. He kept the pedal to the metal with four more birdies on his way home, but two bogeys kept him within the sights of Van Zyl.

The 36-hole leader started in exactly the way he would have wanted: Consecutive birdies on the opening holes made it clear he was going to be tough to stop. An eagle on the sixth saw him turn in 32 and he was in sight of the title.

It was a composed homeward nine for Van Zyl, as he made eight pars, and the birdie he needed to edge into the lead came on the 14th. That was all he needed and he cruised home to set off a series of wins which would make it a year to remember for him.