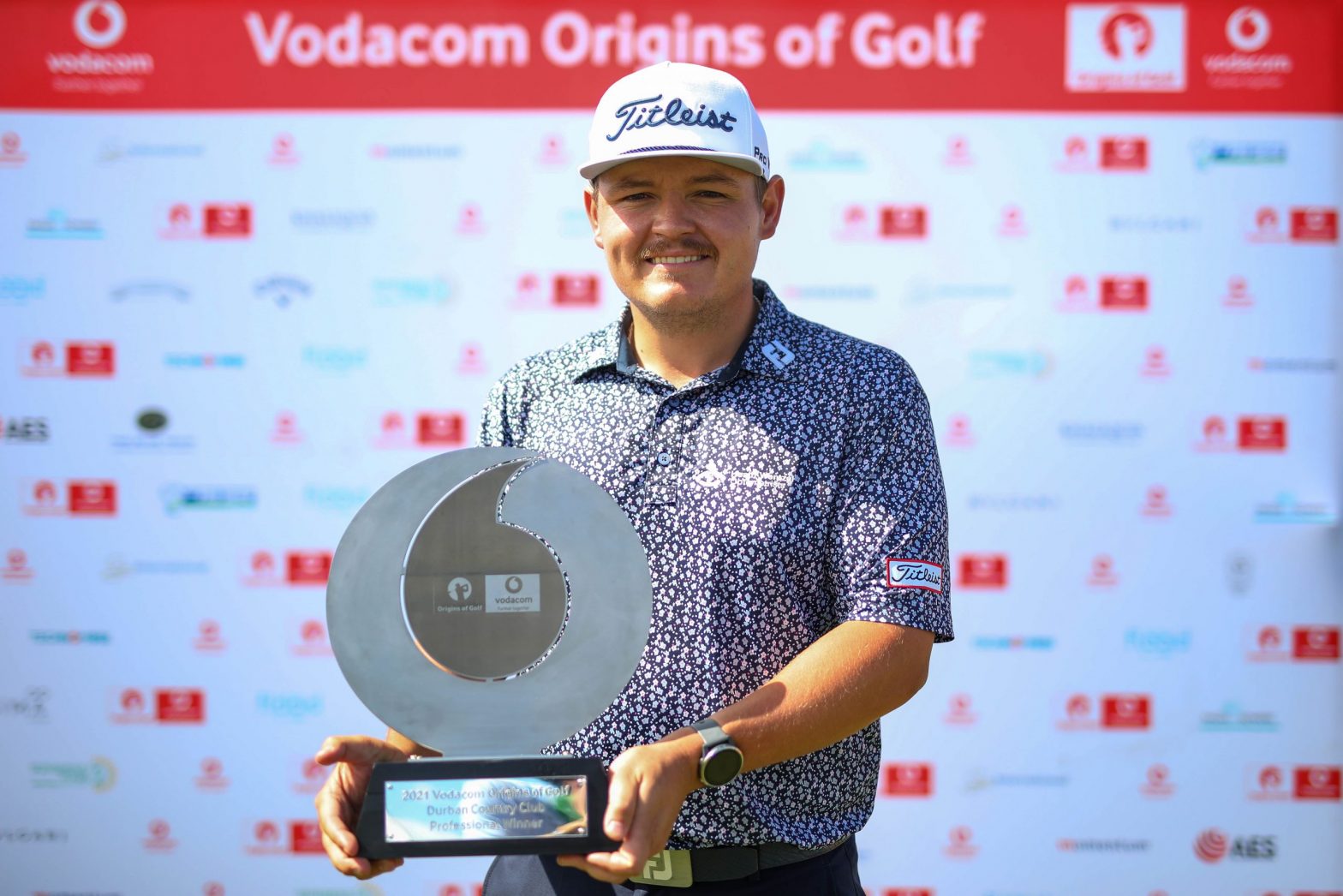 DURBAN, KwaZulu-NatalÂ – Louis Albertse handled the pressure of chasing down his first Sunshine Tour title like a real professional on Saturday as he won the third leg of the Vodacom Origins of Golf Series at Mount Edgecombe Country Club Estate.

The 25-year-old began the final round with a share of the lead, and produced an impressive four-under-par 66 to finish on nine-under-par for the tournament and clinch victory by one stroke over CJ du Plessis (65).

But, as well as Albertse played, a bogey on the par-four 16thÂ left him needing pars on the tricky last two holes of The Woods course. Albertse negotiated the elevation changes and water bordering the 18thÂ green with aplomb.

â€œThere are so many emotions, but it feels really good to have my first Sunshine Tour title. Itâ€™s never easy to win and the last nine holes when youâ€™re going for your first win is particularly tough, but I tried hard to stay in the moment. The bogey on 16 was a bit unsettling, but I knew I was still 100% in it. I had been playing nicely the whole day and all I could do was give it my best.

â€œIâ€™ve been in Category 9 since I started on tour and Iâ€™ve worked really hard to get out of it, I always felt I was good enough to win. Now there are lots of things to look forward to, getting into big events now without any worries. I saw a couple of scoreboards on the way in and I knew CJ was playing well, which was a good thing in a sense because I knew I had to keep pushing and not play defensively,â€ Albertse said after his wire-to-wire win, having shared the lead with veteran Brazilian Adilson da Silva after the first two rounds.

Albertse, who hails from Dundee in Northern KwaZulu-Natal, went out in two-under-par 33 and then made an ideal start to the back nine with a lengthy birdie putt on the 339-yard par-four 10thÂ hole.

â€œI made a few good par-saves at the beginning but unfortunately took a six on the second par-five. But Iâ€™ve been putting really well and the birdie on 10 was a massive bonus, that just makes sure you get into the right gear going into the downwind holes. I also made a really good save on 13 and then birdies on 14 and 15 [another long putt] kept the momentum going,â€ Albertse said.

Du Plessisâ€™ five-under-par 65 started inauspiciously with a bogey at the first hole, but thereafter he did not drop a shot, collecting five birdies including four in five holes from the sixth. It is the Irene Country Club golferâ€™s fourth runners-up finish and he is yet to win a professional tournament.

Adilson da Silva was one shot off the lead when he made the turn, but returned to the clubhouse in level-par to finish on six-under-par, two behind Du Plessis and in the tie for third with Riekus Nortje and Deon Germishuys.