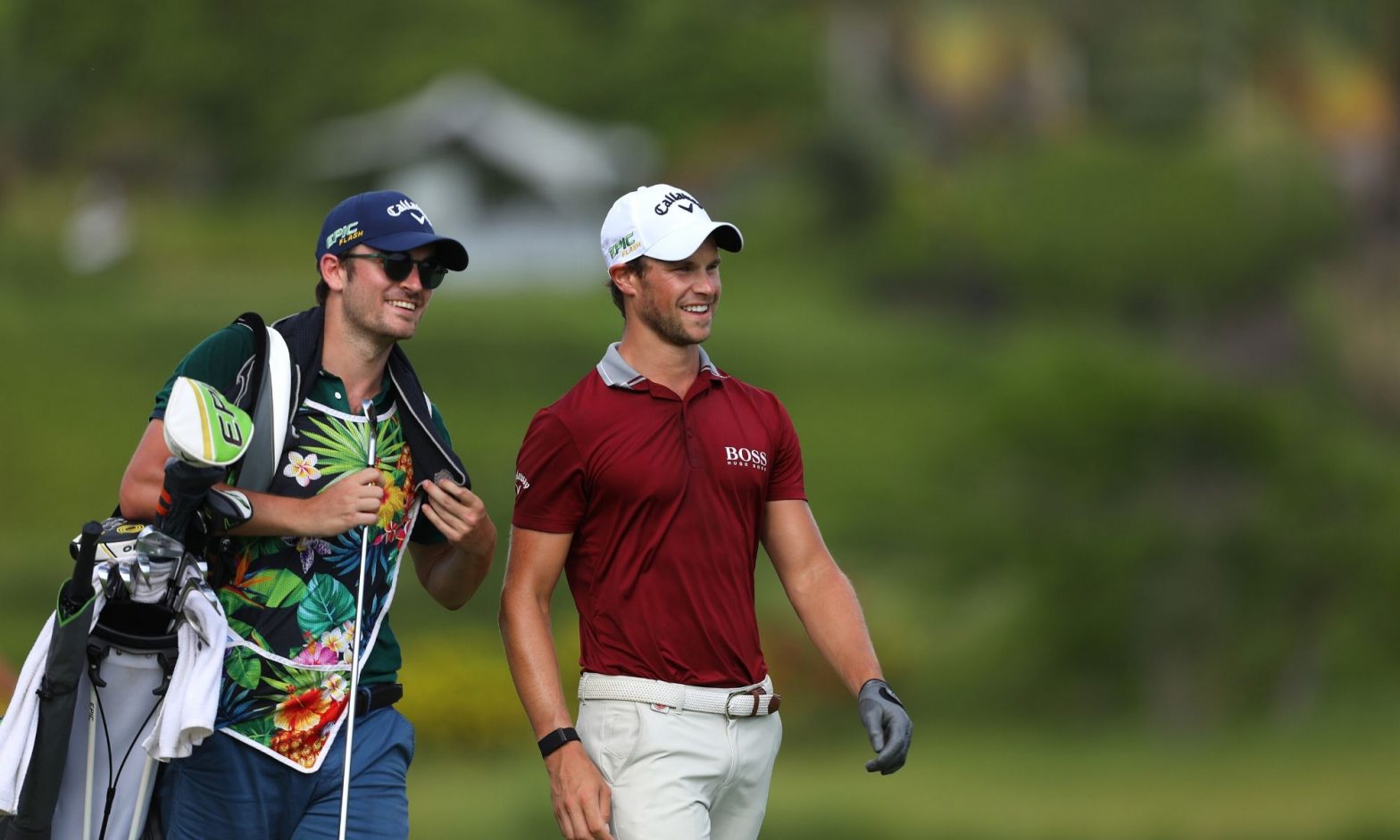 Heâ€™s almost breaking the door down now, and Thomas Detry of Belgium kept knocking hard on Saturday with a five-under-par 67 to head into the final round in a three-way share of the lead of the AfrAsia Bank Mauritius Open.

Despite bogeys on 12 and 16, the 26-year-old made seven birdies, including three consecutively around the turn at Heritage Golf Club as he set himself up for a tilt at his maiden European Tour title in the tournament co-sanctioned by the Sunshine Tour, the Asian Tour and the European Tour. He shared the lead with Scotlandâ€™s Calum Hill and Antoine Rozner of France.

â€œI’ve been in this position a few times,â€ said Detry. â€œI was in this position three weeks ago in Sun City at the Nedbank Golf Challenge. A few weeks before at the French Open, I gave myself a chance to win too.

â€œI got off to a better start today compared to yesterday â€“ two-under after five. A great drive on nine, hit the green there and got it going. I made two silly mistakes. I think we misjudged the yardage on 12, we hit the wedge shot about 25 metres short. Donâ€™t know what happened there. The 16th is a bit of a tricky green very firm. But very, very happy with the way I played today.â€

Detry has produced round of 67, 66 and 67 in this tournament, and, with his only professional winning coming on the Challenge Tour when he won the 2016 Bridgestone Challenge by 12 shots from Thriston Lawrence with a record score of 259, 29 under par, itâ€™s clear he can go low once again and run away with things.

He turned in three-under 33, showing nary a sign of pressure, but the bogeys blotted his copybook on the homeward nine after he had started it so well with birdies on 10 and 11. However, he steadied things with birdies on 15 and 18 â€“ the latter thanks to an aggressive approach from the left of the fairway to the pin placed close to the water on a narrow green.

â€œWe had a few good breaks, took advantage of the birdie putts we had. Very pleased with the way I played. Ball striking wasn’t 100 percent on the first few holes, but I got some confidence and felt pretty good out there,â€ he said.

Rozner looked as if he were going to be the sole leader as he reached the turn in five-under 31 with an eagle and three birdies. But he was unable to register another birdie from the 10th until the 16th where he dropped his first shot of the day. However, he made up for that with a pair of birdies to finish.

Hill, the 25-year-old Scot, made six birdies and two bogeys to continue his good week and edge ahead of Danish teenager Rasmus Hojgaard and Americaâ€™s Sihwan Kim who shared fourth place one stroke back on 15-under ahead of the final round.

One of the most remarkable rounds of the day came from first-round leader Brandon Stone, who opened with a triple-bogey. He made three more bogeys in his first 10 holes, while somehow keeping his challenge barely alive with three birdies in that stretch. Then he turned on the turbojets as he raced home with six birdies in his final eight holes to card an unlikely three-under 69 and join Italyâ€™s Renato Paratore in a share of sixth, two shots off the pace.

For Detry, the push for victory will involve pretty much what he always does. â€œI think itâ€™s all about keeping it simple,â€ he said. â€œJust play like you have been playing in practice rounds. Itâ€™s easy to say, but I think thatâ€™s how you approach the fourth day.â€