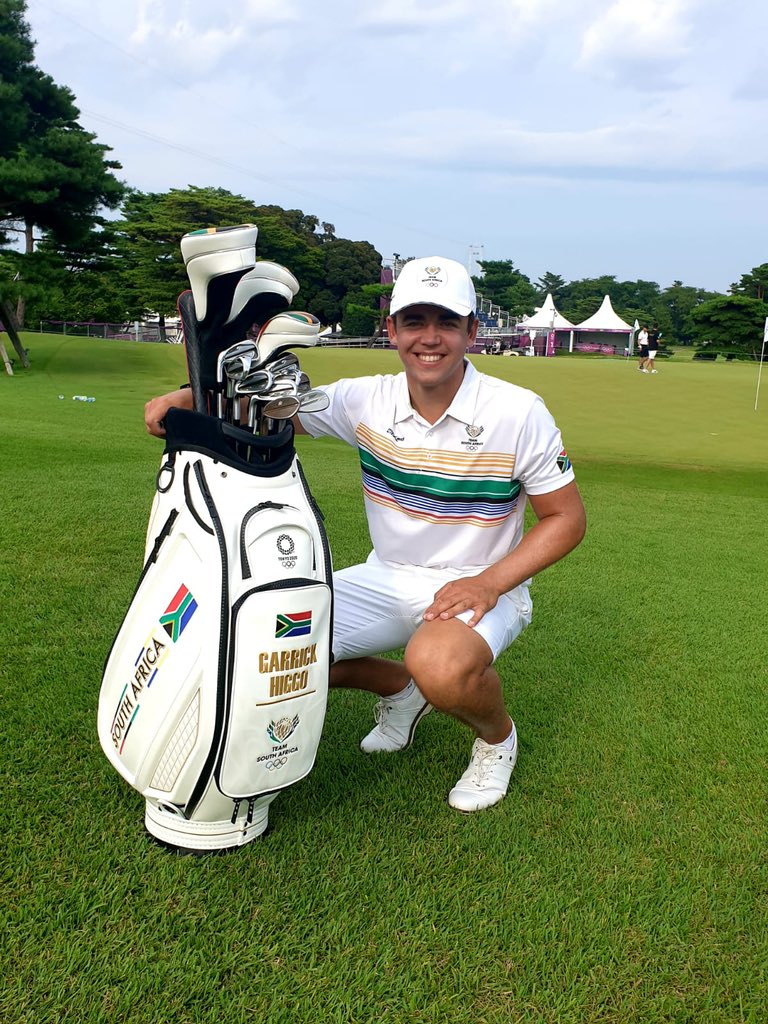 Garrick Higgo and Gary Player share a passion for golf and a bond forged by tragedy. Now, as Higgo prepares for the Olympics, he arrives at a venue where his legendary mentor experienced success more than six decades earlier.

Player has dispensed invaluable advice to Higgo in countless letters and phone calls. They first met when Higgo was around 9 years old, too young to realize Playerâ€™s place in the game. Now Higgo canâ€™t speak highly enough about the impact the World Golf Hall of Famer has had on his career.

Higgoâ€™s next stop is Japanâ€™s Kasumigaseki Country Club, where heâ€™ll represent South Africa in the Olympic Games after a rapid ascent in the world rankings.

â€œItâ€™s pretty cool, especially at 22. It makes it even bigger,â€ Higgo said of the Olympics. â€œAt the beginning of the year, it would have been cool to make it but I didnâ€™t think I would. I was well out (of a spot in the Games). It just means Iâ€™ve done some things well on the golf course.â€

That he has. Higgo was 117th in the world ranking in mid-April. Then he won three times in a span of five worldwide starts to leap into the top 50 and earn his Olympics berth. That run included his first PGA TOUR victory, in the Palmetto Championship at Congaree.

The Olympic venue is the same course where Player represented their homeland in another important international competition: the 1957 Canada Cup. That event, now known as the World Cup, featured 30 two-man teams from around the world.

Player was still early in his career when he tied Sam Snead for second place at Kasumigaseki. The tournament was Playerâ€™s first trip to Japan and further cemented his belief that he could compete on the biggest stages.

There are strong parallels between the paths that the mentor and mentee took to Kasumigaseki.

Player was days from turning 22 years old when he arrived at Kasumigaseki. He had just finished his first season on the PGA TOUR.

He remembers receiving $500 in travelerâ€™s checks from his home country to defray his travel costs. The victory by the home team â€“ which swept both the team and individual titles â€“ sparked a golf boom in Japan.

â€œI was very impressed with the golf course, as well as the galleries,â€ Player recalled recently to PGATOUR.COM. â€œI loved the food, which in my opinion is the right kind of food to eat in order to live a long time. I enjoyed the efficiency, which is a way of life for the Japanese, and I was especially impressed by their work ethic.â€

Higgo, who turned 22 in May, earned PGA TOUR status with his win at the Palmetto in June. He credits Player for helping him become the youngest player currently in the top 50 of the world ranking. Higgo calls Player â€œa tremendous mentor.â€ Some weeks, they speak after each of Higgoâ€™s rounds.

One of the most impactful letters came early in their relationship, after Higgo lost his father in a car accident. Higgo was just 9 years old. Player, who lost his mother to cancer at a similar age, offered empathy and encouragement.

Higgo lived in Plettenberg Bay, where Player had a vacation home. They would play nine-hole rounds in the afternoon when Player was there on holiday. Player describes his protÃ©gÃ© as â€œhumble, keen to learn and a good listener.â€

Higgo was South Africaâ€™s top-ranked amateur by age 17. In the 2017 U.S. Junior Amateur, he beat Cole Hammer, who later became the worldâ€™s top-ranked amateur, in the Round of 16 before falling to Matthew Wolff on the 17th hole of their semifinal match. Higgo played for the International Team in that yearâ€™s Junior Presidents Cup (and is a strong candidate to play in the big-boy version just five years later). He started at UNLV, one of collegiate golfâ€™s powerhouse programs, a few weeks later.

Higgo only spent a year in Las Vegas before deciding to return home. He turned pro in 2019 despite sitting outside the top 100 in the world amateur ranking.

â€œA lot of people didnâ€™t think I should even turn professional,â€ Higgo said. â€œI wasnâ€™t even winning amateur events, so they questioned why I was turning pro.â€

Higgo overcame a six-shot deficit in the final round at Congaree to win his first PGA TOUR title. Player called him that Sunday with some more important advice.

â€œHe told me he’s done it before quite a few times, the way he’s won from six behind, seven behind,â€ Higgo said. â€œHe just said don’t think too much about what the other guys are doing, just kind of do your thing and stay up there, and you never know what could happen.â€

Higgoâ€™s Sunday 68 included a bogey-free back nine that was highlighted by an eagle at the par-5 12th. He was on the driving range, preparing for a possible playoff, as the final group of Chesson Hadley and Harris English struggled on Congareeâ€™s back nine, shooting 38 and 40, respectively.

â€œIâ€™m a very tough competitor,â€ Higgo said. â€œI donâ€™t really get down on myself. Itâ€™s a clichÃ©, but I try and stay in the fight.â€

Itâ€™s a trait he shares with Player, who also turned pro as a teenager despite othersâ€™ doubts. Player won the 1956 South African Open, the Dunlop tournament in England and the richest prize in Australian golf at the Ampol. Just four years earlier, he was playing to a 24 handicap. One newspaper described his meteoric rise as â€œone of the most amazing success stories in golf.â€ Player recounted how his countrymen laughed at his unorthodox grip and flat swing. â€œYou will never be a good golfer,â€ Player recalled some saying to him.

â€œThat is why I had to succeed,â€ Player said after winning the Ampol. â€œThose people did not know the hours and hours I spent working out how to eliminate errors in my game.â€

Player headed to the United States the following year to test himself at the highest level. Seeing how far the gameâ€™s top players hit the ball caused Player to intensify his now-famous exercise regimen, weaken his grip and learn how to carry the ball farther.

â€œIâ€™d read about Ben Hogan and Sam Snead and other players of that time. I admired the United States so much and wanted to go there and try to beat the best,â€ Player recently told PGATOUR.COM.

Like Player, Higgo plans to play a global schedule. His wins around the world make it easier for him to pick where and when he plays. He was the first player since 1988 to win on the PGA TOUR in one of his first two career starts. Heâ€™s the only player since 1990 to win at least three times in his first 26 starts on the European Tour.

This week, heâ€™ll be walking in the footsteps of his mentor at the worldâ€™s grandest sporting event, the Olympic Games. – Sean Martin/IGF