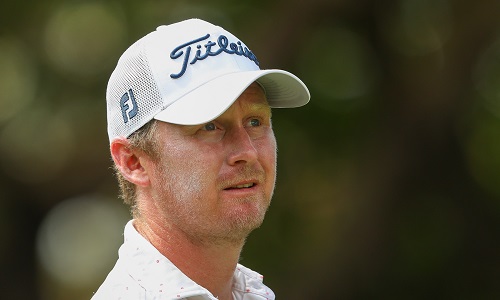 Justin Harding finished in a share of fourth in the Masters behind winner Jon Rahm last week â€“ in a computer simulation using data processed by the company DataGolf.

Harding, who played in his maiden outing in the yearâ€™s opening major championship last year and secured his return to Augusta National with a share of 12th, was set to play again this year until the tournament was postponed until November due to the coronavirus pandemic.

With the world missing out on something called â€˜a tradition unlike any otherâ€™, Golf.comâ€™s Sean Zak picked up on an idea that has its roots in computerised predictions such as the January 1970 â€˜boutâ€™ between Rocky Marciano and Muhammad Ali (the computer determined that Marciano would have won by knock-out in the 13th round) and the clash between chess champion Garry Kasparov and the computer Deep Blue.

â€œDataGolfâ€™s Masters modelling accounted for player skill and recent form, but also factored in historical performances at Augusta,â€ wrote Zak. â€œIs there an element of randomness to the process? Of course! The first time you run a simulation, for example, will produce different results from the seventh or 23rd time you run it. But itâ€™s still a ton of fun to see how things shake out. For what would have been the 84th playing of the Masters, we asked for the 84th single-run simulation of how DataGolfâ€™s system would predict this yearâ€™s event.â€

It was a â€˜tournamentâ€™ dominated by Rahm, as the Spaniard opened with a seven-under 65. He relinquished sole possession of the lead after a second-round 74, sharing the top of the leaderboard with Lee Westwood and Bubba Watson. After a third-round 71, he was again on top with Tommy Fleetwood, and a closing 68 pulled him one shot clear of the fast-finishing Dustin Johnson, who carded a 63 to share second with Adam Scott.

Harding was eight shots behind Rahm after his opening 73, but he pulled things back with the round of the day in the second round, a four-under 68, a score matched only my Cameron Smith. After being one-over through six in the third round, Harding finished that round in level-par to share sixth with Scott, Sergio Garcia and Daniel Im.

While Johnson posted the clubhouse target with his 63 in the final round, Harding kept himself very much in the mix as he reached the 12th in two-under. He picked up two more shots on his way in to close at seven-under for the tournament, just three behind Rahm.

Of course, this is just a computer simulation, but the data used confirms that Augusta National is likely to be a course where Harding can flourish, and it makes the November date he has there all the more enticing.

For the record, other South African â€˜performancesâ€™ were: Dylan Frittelli one-under for a share of 16th, Louis Oosthuizen at level-par (T18), Erik van Rooyen at two-over (T27), and Christiaan Bezuidenhout seven-over (T51). Two South African past Masters champions, Trevor Immelman and Charl Schwartzel, missed the cut, according to the computer modelling.