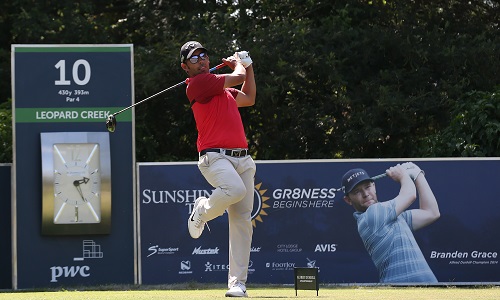 It nearly unravelled for Pablo Larazabal on Sunday in the Alfred Dunhill Championship, but he regained his composure to card three birdies in his final four holes at Leopard Creek to pull off a thrilling single-stroke victory.

The Spaniard had to shut out the pain of blisters on his feet, which may or may not have been the cause of his poor opening nine of six-over-par 41, to mount a comeback charge and haul in Swede Joel Sjoholm and Wil Besseling of the Netherlands with his closing nine of three-under 34 and take his fifth European Tour title.

â€œThis morning, I couldnâ€™t put my shoe on, I couldnâ€™t walk to the buggy and I thought I wouldnâ€™t be able to play because I had blisters,â€ he said. â€œOn the front nine, I was playing the worst golf of my career, and I just decided to put my heart into it on the back nine.â€

Although he was visibly still battling the pain, he pulled himself together after tossing his driver aside after a poor tee-shot on the ninth, and pulling off his shoes and tossing them away in a frustrated gesture.

â€œI couldnâ€™t go through with my shots because I couldnâ€™t put weight on my right big toe, so I figured out if I lifted it, I could make something happen â€“ just put the ball on the fairway, or near the fairway, and I might be able to do something,â€ he said.

It paid dividends almost immediately with a birdie on the short par-four 11th. But the comeback seemed as if it might be short-lived when he bogeyed the 13th, the signature Leopard Creek par-five which was playing very easy on the final day.

But a hard-fought par on 14, a birdie on the par-five 15th, a rare birdie on the par-3 17th over the water, a good par on 17 and then an exquisite pitch to inside two feet on the iconic par-five 18th with his third shot saw him able to get his nose in front after he had quickly blown his overnight three-stroke edge with five bogeys and a double in the opening nine.

Sjoholm, who was second-reserve for the tournament, and decided to travel to South Africa in any case â€“ â€œI could watch lions for a week if I didnâ€™t get in,â€ he said â€“ was given a last-minute invitation into the field and he fully justified the decision. His final round of 69 had just a single bogey, unusual on a day when only 19 of the 71 players who made the cut were able to break par.

Besseling fought to the bitter end with his closing 74, and finished up sharing third with four-time Alfred Dunhill Championship winner Charl Schwartzel and 2014 champions Branden Grace.

Larrazabal has loved Leopard Creek since he first came here, and the bravery with which he fought for the victory and the emotion that spilled over after he won showed how much he loves it. â€œTo be king of the bushveld for a year is very special,â€ he said. â€œI played my first tournament here, and I will come back here until I canâ€™t play anymore.

â€œIâ€™ve been struggling with my game for the last four years, and to finally get the win in paradise is very special.â€