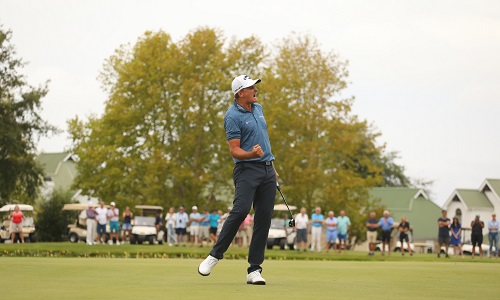 Bezuidenhout climbed to 48th from 60th on the list, leap-frogging Erik van Rooyen and Shaun Norris in the process as he eagled the last hole in a thrilling climax to a tournament that saw him duelling with George Coetzee for the entire final round. He is now the closest South African to Louis Oosthuizen, who slipped a single spot to 17th this week.

Bezuidenhout is now set fair for a tilt at a spot in the Masters in April if he can keep himself inside the top 50 in the world until the week before the first major championship of the year gets underway at Augusta National on April 9.

He heads off to Mexico this week for the World Golf Championships-Mexico Championship, together with fellow-South Africans Branden Grace, Justin Harding, Zander Lombard, Norris, Louis Oosthuizen and Van Rooyen. The seven South Africans make up fractionally short of 10 percent of the 72-man field in a no-cut event that will be stacked with world ranking points.

With Van Rooyen, Harding, Oosthuizen and Trevor Immelman already in the field for this yearâ€™s Masters, Grace and Norris in particular will be keen to pick up enough points to get them into the reckoning for a trip down Magnolia Lane.

Van Rooyen is 52nd, Norris 61st and Grace 71st. With the likes of world number one Rory McIlroy leading all of the worldâ€™s top 10 â€“ except Tiger Woods â€“ into action this week, a solid finish could catapult those close enough to 50th on the rankings above the benchmark and set them up for one of the most coveted invitations in golf.

Bezuidenhout, who started the year ranked 87th, exhibited the kind of form which made him a debut European Tour winner last year in June when he took the Andalucia Masters. He had been in good form in 2020 so far too, with a play-off defeat to Australiaâ€™s Lucas Herbert in the Omega Dubai Desert Classic in January.

The manner of his victory in the Dimension Data Pro-Am will give him the confidence he needs to take this opportunity to cement his place inside the worldâ€™s elite for the foreseeable future.

Given that the Mexico tournament will be his first taste of play in the WGC series, he is certain to pick up world ranking points for even an average performance. The other South Africans in the field, however, will be looking for more than that.